In 2009, I bought a Iolair MB24W, one of those with a MVA display. Except the time when I had to reset the screen to restore the EDID (Press M, +, - until the blue led blinks 3 times), the screen works fine ... until recently.

The screen switches on but stays white. No picture at all, not even the OSD menu.

Let's look inside. Maybe it's a disconnected cable like most forum will suggest. 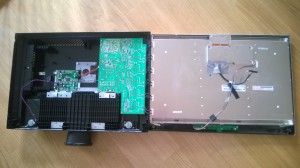 Until now, it looks good. Let's look at the electronic board. 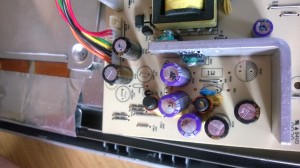 Found it !! Three capacitors are dead. (The 3 purple ones). It's noticeable by the little dark liquid that escaped from the safety valve. 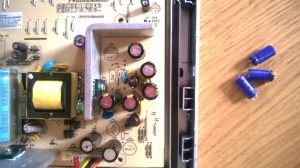 3€ later, the capacitors are changed and the screen is working again perfectly fine 🙂

This site uses Akismet to reduce spam. Learn how your comment data is processed.